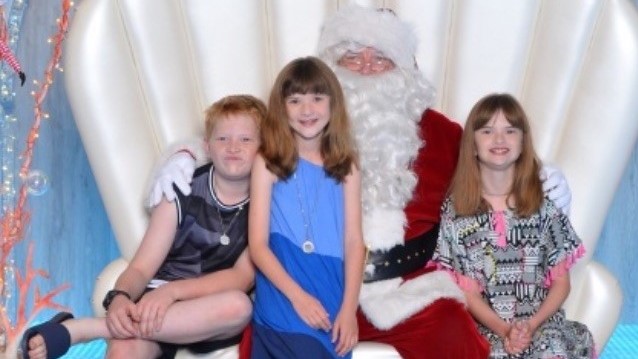 “My two girls are battling a terminal illness”

In many respects, Clare White has been dealt a tough hand in life.

Her two daughters, 11-year-old Lauren and nine-year-old Holly, have been diagnosed with the terminal brain disease leukodystrophy, while her son, 13-year-old Brodie, is autistic.

Doctors told the West Australian mum that her daughters may not live past the age of five, but the good news is that the girls, who also suffer from an intellectual disability, are defying the odds.

“They are full of life and they are still winning as far as we are concerned, so we choose to focus on the positive,” Clare says.

“The oldest a person has ever lived with this disease is roughly 30 so we’re hoping for the best.

“It’s sad, but you could just as easily walk outside and be hit by a bus. That’s the way life is.”

Clare’s positive attitude partly comes down to the research she has done into the disease.

“I looked into it and found that the kids that fared better and lived longer were those who were surrounded by positive attitudes,” she says.

“I am also a big believer in the powerful effect of thinking positively.

“I just want to make their lives as good as possible for them.”

While the girls are in a wheelchair during school time, they are up on their feet come recess.

“We like for them to conserve their energy so they can dance and enjoy themselves at school lunchtimes,” Clare says.

“Their brother is extra protective of them, too. If anyone tried to have a go at them, they would have to go through him first.”

Clare, who suffers from her own range of conditions, including a muscular skeletal disease, asthma, and hypertension, undoubtedly has a full load.

But she has unfaltering support from her partner, Rob, and his two children.

“Rob shares custody of his kids and when they come over it works out really well and none of the kids fight with each other,” Clare says.

“Rob’s children have become great carers for my girls and Brodie. They’re not worried about their special needs so that means my kids feel accepted.

“Rob took me and my kids on knowing everything that came with it, which is amazing.”

Because Clare is managing so many conditions — including her own — she is constantly juggling medications.

“I have 12 scripts to manage on my own, while Brodie has four and Lauren and Holly have six each,” Clare says.

“Before we downloaded MedAdvisor we were running out of scripts on a weekly basis.

“Now, since we have downloaded it, I think we have only run out of scripts maybe once or twice.”

The big appeal of the app for Clare is that it helps her remember the details of what medication she and the family are on.

“I will literally take the app to the doctor and we will both look at what scripts I am on and what we need more of,” Clare says.

“In the past, Rob would ring up the chemist and go through all of the medications and it would take forever, but now we just tap and refill.

“For a family with a lot on its plate, it’s one less thing we have to worry about.”

Previous Story
← 4 Simple and Proven Tips to Reduce Your Stress
Next Story
How to Improve Your Asthma Control: 3 Important Tips →