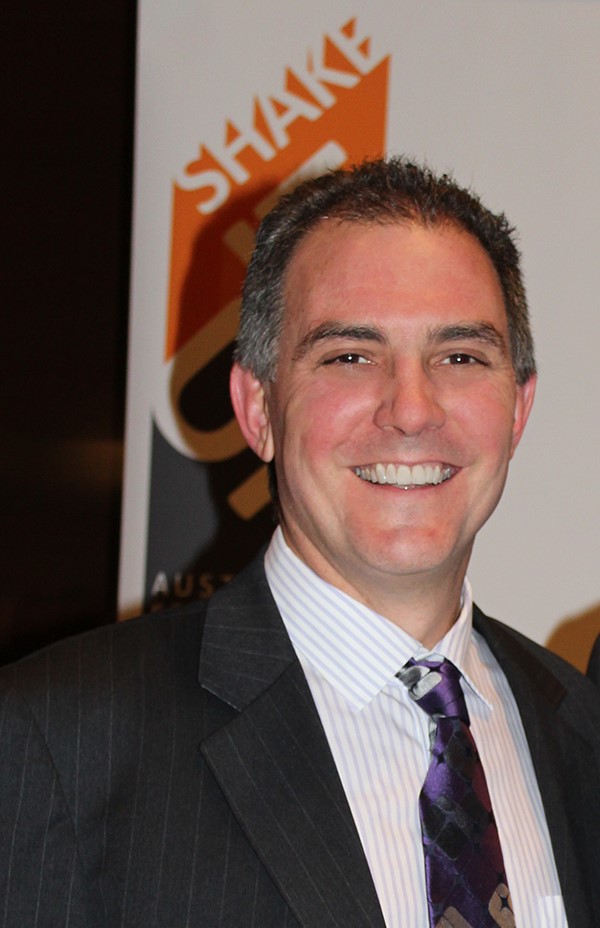 As a CEO of a successful company with 60 staff, Clyde Campbell is used to speaking in front of large crowds.

Which is why he was miffed when he started shaking during a routine company presentation some nine years ago.

“I am usually quite confident in those situations so it did surprise me, “ says Clyde.

“But I put it down to a strange case of nerves.”

Later that day, however, his tremors became worse.

“I was at a company dinner and I went to take the glass of water from the waitress’s tray and I turned the glass into a washing machine,” he says.

“That is when I thought something was up.”

Clyde, who is the founder of Machinery Automation & Robotics, went to the doctor the following Monday, who referred him to a specialist.

After numerous tests it was confirmed that Clyde, who was just 44 then, had Young Onset Parkinson’s, a progressive neurological condition in which the chemical dopamine, which regulates mood and movement, is no longer produced at the same level.

This Thursday (April 11) marks World Parkinson’s Day and Clyde is hoping it will raise awareness of what Parkinson’s is — and isn’t.

“One of the biggest misconceptions about Parkinson’s is that it’s an old man’s disease,” Clyde says.

Another misconception is that its symptoms are largely to do with tremors.

In fact, Parkinson’s is marked by a range of symptoms, including an increased likelihood of dementia, whole body imbalance, and even depression.

After Clyde received his diagnosis, he wasted no time feeling sorry for himself.

“I tend to look at most things in life as fixable,” he says.

“So when I saw that this was a degenerative neurological disease, I thought, ‘Well, we’re going to have to come up with a cure’.

In order to do that, Clyde knew he would need a foundation to fund research. So eight years ago, he set up his Shake it up Foundation Australia  to increase awareness and help find a cure.

“We have some great researchers in Australia but funding the research is always a problem,” he says.

“We also wanted to make sure that our research projects looked at different aspects of the disease so we weren’t duplicating research and wasting money on areas that were already being studied.”

The result? Clyde’s foundation has raised more than $10.4 million across 32 research projects in 12 different institutions so far.

“The aim is that we develop ways to slow, stop and eventually cure the disease,” he says.

Clyde, meanwhile, is not letting his diagnosis get in the way. He has good days and bad days, but he is intent on pushing through.

“On the good days, you don’t have any tremors and the medication is working really well,” he says.

This is typical, in many ways, of the nature of Parkinson’s, which defies easy categorisation.

“We think that 10 per cent of cases are genetically linked, but beyond that it’s very hard to say what triggers the disease,” Clyde says.

Sufferers, or those, who have been recently diagnosed, should not despair, according to Clyde.

“Don’t think of the diagnosis as the first day where you stop living,” he says.

“Keep socialising and find support with friends and family.

“In the end, you can still have a high quality of life with Parkinson’s.”

For more information on the Shake it Up Foundation, visit https://shakeitup.org.au

This World Parkinson’s Day, we are proud to #helpfortodayhopefortomorrow

Previous Story
← Glaucoma. Could you be one of the undiagnosed cases?
Next Story
"The myths surrounding vaccinations exposed" →