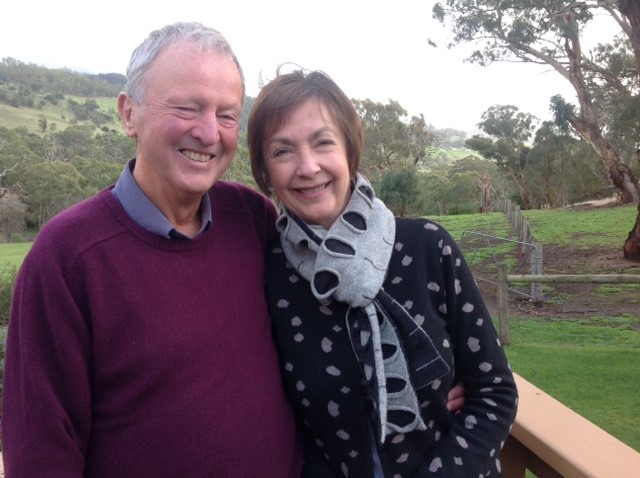 My partner’s love for me saved my life

Nigel Harland was working long hours as an actuary for a Melbourne insurance firm when he was diagnosed with Non-Hodgkin’s Lymphoma.

“It was a very stressful job and I was working extremely hard,” he says.

“The cancer was stage four by the time it was diagnosed, and I went through three years of treatment, including three months in hospital, but nothing was working and the cancer kept coming back.”

The doctor told Nigel, somewhat ominously, that there were only three chemotherapy drugs left to try — red ones, blue ones and white ones.

“He told me each one would keep me alive for six months, so, essentially, I potentially had 18 months to live. Then he asked me which one I would like to try first.”

Nigel picked the blue ones, and with his new partner, Anne, packed up and headed to the outskirts of Castlemaine for a fresh start.

Remarkably, Nigel wasn’t concerned about the prospect of dying.

“In order to qualify for a disability pension, the doctor had to sign a form claiming that I probably wasn’t going to be living longer than a year,” he says.

“I was actually elated to see those words because I figured at least it would be a year of peace. My life in Melbourne had been so stressful.”

That was 29 years ago. Not long after Nigel and Anne moved to Castlemaine’s outskirts, their lives changed dramatically.

“I took the blue pills and the cancer never came back,” Nigel says.

“It was also a new lease of life for Anne, and when she moved here she started studying psychology.

“She has been working as a psychologist with the same company now for many years since.”

While the wonders of modern medicine are not to be dismissed, Nigel is in no doubt as to what really saved him.

“We both had been married previously and we only got together when I became ill.

“Her support and love for me has been, without doubt, what kept me alive. I’m not an overly spiritual person, but sometimes, I think there are things going on in the background that you don’t quite understand.”

This is where the MedAdvisor app is particularly useful.

“It’s crucial, really, because I would otherwise forget when my medication was running out,” he says.

“I would be sorting out my pills for the week in the various pill boxes and suddenly realise I only have enough until Wednesday, and then we would have to rush to the pharmacist.

“This way, it doesn’t matter if I forget because the app remembers for me.”

Nigel’s life, in every other respect, is better than ever. He and Anne travel regularly, and Nigel is a keen bird-watcher.

When not on the road, he is content to bunker down on his six-hectare property, enjoying an evening glass of wine while watching the sunset.

“I used to meditate a little bit, but once I moved here, I realised I didn’t have to because it’s like being in a permanent state of meditation,” Nigel says.

“The landscape is so beautiful.”

Want to share your MedAdvisor story? Send us an email to get in touch with us.

Previous Story
← "Cincotta Discount Chemist Succeeds by Streamlining Dispensing Process"
Next Story
Are you depressed? Here is how to tell (and what to do about it) →