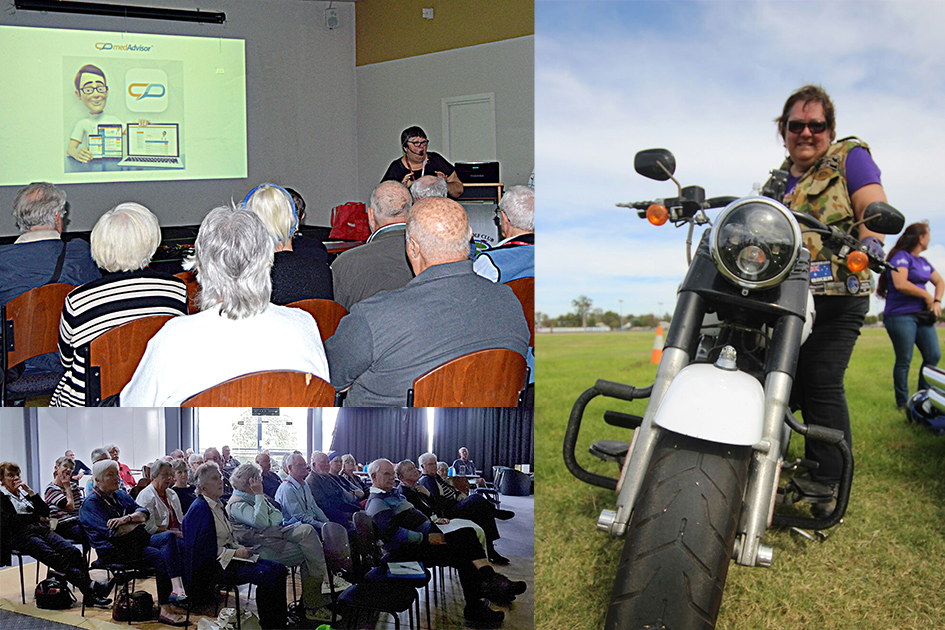 Amanda Annabel is not one to shy away from a new adventure.

After all, the 60-year-old rides a Harley-Davidson motorcycle, spent eight years in the Australian Army Reserves where she fired heavy artillery, and is a member of a mind-boggling amount of local groups in her Eurobodalla shire, on the NSW south coast.

So when her husband, Noal (CORRECT SPELLING) told her about MedAdvisor some three months ago, she downloaded it on the spot and has been using it ever since.

“I was honestly surprised it took so little time to get my head around it,” Amanda says.

“It’s easy to use, and I love the fact that when I go into my medication list it even shows me an image of my tablets, which helps to make sure I am taking the right ones.”

So impressed was Amanda with her MedAdvisor experience so far that she recently gave a presentation on the app to her Eurobodalla Senior Computer Users Group (EuroSCUG), where she holds the role of president.

The group consists of 120 members, aged from 60 to 98, who are interested in learning more about the use of digital devices, including desktops, laptops, tablets or smartphones.

The EuroSCUG group hosts monthly guest speakers from government and corporations, who offer insights and advice across the areas of e-commerce, apps, computer operating systems, and cyber safety.

On the day she gave her speech, Amanda was taking 22 tablets and using three puffers within that 24-hour period to help manage her Chronic Obstructive Pulmonary Disease, a lung condition that can make it hard for her to breathe.

“The crowd loved my speech and a lot of people wanted to know more about MedAdvisor afterwards,” she says.

“It’s particularly useful as a reminder service for elderly people, and here at Eurobodalla we have the highest percentage of retirees in Australia, so it’s very useful.

“I wasn’t that great at remembering to take my medication before downloading the app, as there are more than 12 different types I’m on, including vitamins.

“So it has made a big difference to my life.”

Amanda’s enthusiastic support of MedAdvisor is very much in keeping with her broader approach to life.

She and husband, Noal, retired to Eurobodalla five years ago, and she was determined to be an active and engaged member of the local community.

“My parents took a different approach when they moved here and didn’t engage with anyone other than their neighbours, many of whom have passed on,” Amanda says.

“I was not going to be like that so I joined absolutely every community group you can imagine.”

This included starting her own group, too. An enthusiastic Harley rider, Amanda has gathered together a loose affiliation of women riders who are also keen to get on their bikes.

Many of the women in the group have husbands who ride and they wouldn’t mind learning as well,” she says.

Amanda’s Harley is a 1600CC and she admits to being more than slightly attached to it.

“I keep it in the hallway and I tell you what, if I could get it up the stairs it would be in my bedroom with me,” she says.

This love of adventure is also evident in Amanda’s eight-year stint in the Australian Army Reserves, which she joined at the age of 34.

“I was a mum with three kids under four and needed to do something different with my life,” she says.

“I was posted to the recruiting unit, which meant that I needed to experience everything once — from driving a tank to nuclear biological warfare technology training — so I could talk to new recruits about it.

“I tell you what: I was the coolest Mum at the school gate during the Army years.”